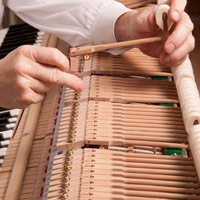 Piano voicing, alongside piano tuning and piano regulation, completes the set of actions that produce a high performance piano situation if performed well. As a final step in any major work, this is the high-end rebuilder’s most critical skill. Also called tone regulation, piano voicing is sometimes misunderstood both by piano players and piano technicians.

Piano voicing is typically thought of as puncturing the hammers with needles to influence the sound. It is true that needling hammers is an important part of piano voicing. However, all procedures that affect tone should be addressed before attempting a full needling. What piano voicing procedures and checks should be made?

Piano voicing is really a concert or high-end practice whereby pianos which are constantly tuned and worked on are needled string-by-string, temporarily muting off wires so that each small segment of a hammer is individually tested and influenced for tone quality. Occasionally done on a grand piano, this is a highly intensive and time-consuming service. In most situations, where voicing issues are solved simply by having a complete regulation, the term “hammer needling” is more appropriate.

The goals of piano voicing run parallel to the goals of rebuilding: to get out of the piano the most sound, the most measurable power, the most beauty, the most dwell/sustain/carry of the individual notes and the most evenness of tone transition as the sound graduates from low bass to high treble.